We've been having a lovely December, cooking up all the goodies for the upcoming holidays.
What.
That's right, kids. Now that Halloween is over (and trick-or-treat is done), we've had lots of time for high-jinks and fun! We flew into Tracy Arnett's Annual Christmas Movie Sunday last weekend, and then we were at First Avenue Daycare for a visit.
First Avenue Daycare? That's one awesome daycare! I think I would like to be a kid again and live in that daycare. Do you think that would be okay? Do you think the kids would mind if a witch was living at their daycare? No?
That's right. I didn't think so.
All the best,
Sandi Witch!
Posted by Little Witch Press at 6:19 PM No comments:

Witches in the Museum!

If anyone was at the Children's Museum today, you may have spotted Pansy and Sandi performing in the theatre space. The two witches had a GREAT time. They read from all three books -- Where Do Witches Go, What Do Witches Do? and Witches Don't Do Ballet -- and were surprised, delighted and astonished at all the little dancers who joined them onstage. You are all fantissimo! Unique! One-of-a-kind!
Last night, the witches could be spotted at the Glebe Community Centre, performing at the Great Glebe Pumpkin Party, and earlier at Tiggy Winkles in Westboro.
The witches are flying off tonight to enjoy highjinks in the neighbourhood! Look for the little witches at book fairs and recitals over the next few months. In the meantime, happy trick-or-treating!
Happily yours,
The Little Witches of Little Witch Press
Posted by Little Witch Press at 2:15 PM No comments:

That's right, my dears, the Little Witches have just successfully launched our newest book, Witches Don't Do Ballet. Today at Old Ottawa South's Firehall, dozens of little readers bustled about colouring, guessing the candy jar contents, and listening to our new story.
Unfortunately my dears, I may have eaten one too many cupcakes. Okay. Maybe three too many cupcakes.
We'd love to hear how you enjoyed it -- and let us know what kind of party you'd like to see next year! Check back soon for pictures.
Lots of love,
Sandi Witch
Posted by Little Witch Press at 5:13 PM No comments:

That's right, my dears...the Big Launch is almost here! This Sunday (October 17) from 2:00 until 4:00, join me (Sandi), Wilhelmina, and Pansy as we flounce about like maniacs, spelling and charming everyone in our path. Cupcakes, my dears...cupcakes! There will be storytelling, etc. etc.  All at the Firehall (Old Ottawa South Community Centre on Sunnyside).
We may even have some special guests -- I hear Roslyn might be in town! Who knew? And as for that skunk of hers. Well, we really must come up with names for all our creatures. I feel a contest comin' on!

It would be lovely if you all could come in costume -- that way we won't recognize you! And tell all your friends!
Yours in pumpkin madness,
Sandi Witch
xoxoxo 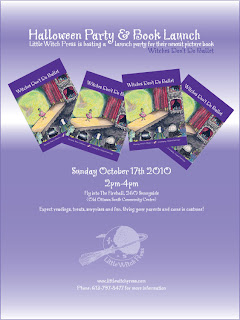 Posted by Little Witch Press at 2:50 PM No comments:

It's your friend Wilhelmina writing. Let me assure you: WITCHES DO INDEED DO BALLET. 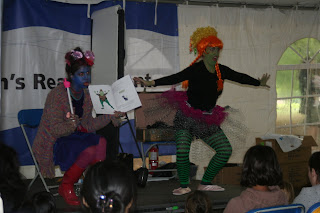 It's true! Look at the photos! Also, a very nice little girl showed me what to do. 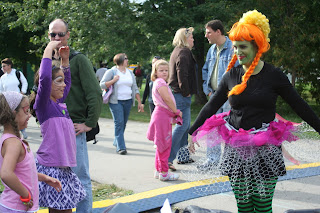 And besides, I have a tutu and everyone knows that a tutu makes the ballerina. 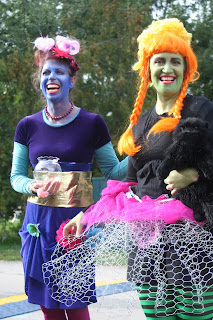 Even Pansy said it looked good, and Pansy knows how to dress.

Come by and the cat and I will give you a little lesson...

Wilhelmina!
Posted by Little Witch Press at 12:34 PM No comments:

Wordy Witches on the Street

Oh MY! Did we ever get some looks from people on Sunday at the Word on the Street. Anyone would think that they'd never seen a witch before! Maybe it was my hair, or I had something stuck between my teeth. It's possible, don't laugh. I get stuff stuck between my teeth, especially if I eat it quickly. 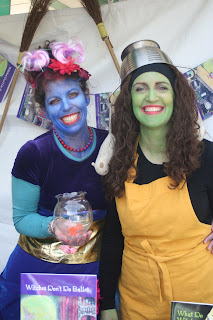 That's me on the right, Sandi Witch. Pansy Witch is in blue. Very fetching, don't you think? Elsie Nisonen was kind enough to take our picture, along with only about a gazillion complete strangers.

Many people came by to see us and have us sign our new book, Witches Don't Do Ballet (I really can't say if witches DO do ballet; whatever that Wilhelmina's doing certainly doesn't look like ballet to me).

Later, Wilhelmina dropped by and did a little dance: 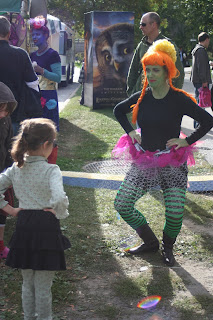 A fun day was had by all! We even got some truly delicious Girl Guide cookies courtesy of a very little witch named Miriam (they were the minty kind, my favourite!).

Thank you everyone who dropped by -- we had to fly back to Ottawa afterwards, ably fueled by Diet Coke and some sugary stuff Pansy bought.