Alan Neal is My Hero

Or he will be once the Little Witches pay him a visit this coming Friday at CBC's Share Central. Alan Neal, host of CBC Ottawa's All in a Day, is perhaps unprepared for the azure and emerald visages of the witches in Full Form, replete with skates and Pansy Poppet in tow.

Come down to the Ben Franklin arena to see us shower attention on Neal!

In the meantime, look what we did to Glaswegian-in-Greenwich Adrian Harkin, one half of the dedicatee couple "Adrian and Johanna" who will be coming to Ottawa in February to experience the joy and splendour of a Canadian Winter. Adrian apparently thinks he'll only be playing ping pong, but we have a few post-Winterlude surprises for him.

Being a Glaswegian, he rarely touches the hard stuff, but I think our story drove him to it, as evidenced by the photo. 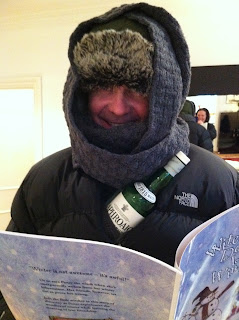 Till Friday, my dearies!
ETD
Posted by Little Witch Press at 6:09 PM No comments:

Thanks to everyone who came out to the launch yesterday. We had such a good time -- the hot chocolate was hot, the cupcakes suitably wintery, and there was even some snow on the ground outside. The Pansy puppet worked marvellously! Susan, Kim and I want to especially thank Steph for the rainbow mitt and servery duties, Aaron for carrying heavy boxes, Abigayle and Genny for managing the money end of things, Caroline for the facepainting, and all our other friends and family members who support us in these adventures. 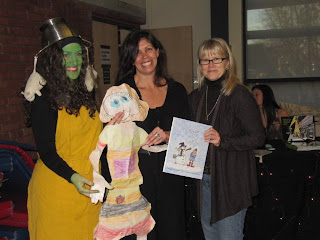 Liz, Susan and Kim hold a copy of the book, plus Flat Abby (drawn for us to look at, but not to take)! I'm quite naturally the one in green.

More photos after the JUMP:


Read more »
Posted by Little Witch Press at 8:47 AM No comments: